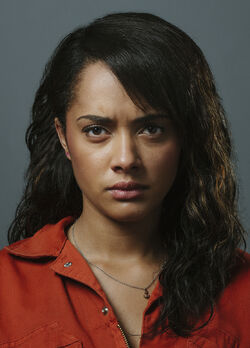 Jess is a member of the Misfits gang throughout Series 4 and 5. Her power is X-ray Vision and she is portrayed by Karla Crome.

In her teen years Jess suffered from an eating disorder and was helped through recovery by her best friend Danny. During this dark time they began sleeping together and Jess began confiding her deepest secrets that only Danny knew. She soon discovered he was only using her delicate situation in order to sleep with her, and eventually he abandoned her for another girl. She tried to kill herself after this by overdosing with pills and vodka but survived the attempt. This made her deeply cynical for three years, and Jess was unable to kiss anyone during that time. She was affected by the Storm and gained the power of X-ray vision.

Jess starts her first day of community service along with fellow newcomer, Finn. They then meet Rudy, who pretends who be their probation worker. Jess easily becomes suspicious of Rudy's strange behavior, unaware that in another room Seth is torturing a man named Michael over a briefcase loaded with cash. Jess uses her power to discover Rudy talking to someone locked in a freezer. She then convinces Finn that something is going on and the two pull a distraction in order to release the prisoner, who only turns out to be Curtis who immediately flees the scene after questioning Jess about the whereabouts of the briefcase. With his cover blown, Rudy reveals to Finn and Jess that he isn't there probation worker and that he and Seth have banded together in order to find the briefcase's location. However, Rudy double crosses them by giving them spiked drinks and locking them in the freezer along Michael. Michael explains to the two that he was the original holder of the briefcase and gained a power from the Storm that makes anybody who touches him obsessed with obtaining the briefcase. Rudy's double soon comes to the rescue and tells them the whereabouts of the money. Upon seeing the briefcase, it is realized that both Jess and Finn became infected by Michaels' power and Jess then chases after Finn (while carrying a broken wine bottle) who's holding the briefcase, along with Rudy, Curtis and Seth. Jess tries to charm Finn into giving her the briefcase but is unsuccessful before Michael intervenes, grabbing the money before falling to his death, making the money blow out by the wind and breaking his spell over the gang. Finn and Jess then meet their real probation worker, Greg.

On community service, Jess and the rest of the gang become suspicious of Finn's odd behaviour, only to find out he's keeping his girlfriend Sadie locked in his apartment in order to cease the effects of her power over him. Even though Jess offers to let Finn stay at her place as Sadie owns the apartment, Finn and Sadie sort out their differences and reunite only for Sadie to start using her power on Finn again. Jess tries to tell Finn what's happening but can't convince him, so instead she enlists the assistence of Seth to use his power once more in order to remove Sadie's and end the cycle of abuse.

With his apartment gone, Finn moves into the community centre alongside Rudy. Jess agrees to help Finn get amenities for his new home by driving him to the apartment of his father's ex, Lisa. Jess notices an odd interest in Finn from Lisa when picking up her television. This turns out to be true when Lisa forcefully preforms oral sex on Finn whilst retrieving the television's remote. Finn denies what happened until Lisa jealously reveals what she did to him. Upset by the actions of what she deems to be her best friend, Jess kicks Finn out of her car and reveals what happened to the rest of the gang. During this period, Jess becomes unnerved by Rudy's psychotic third self due to his confronting nature, while at the same time is attracted to his honesty. Jess and Rudy 3 start talking during a wedding reception at the community centre. During the conversation, Jess reveals her troubled relationship with Danny as she trusts this Rudy. It soon becomes clear that Rudy 3 is dangerous when she sees him beat up the wedding's DJ. Rudy 3 then forces Jess to dance with him, revealing that he's been planning on killing her ever since he first saw her. Jess then kills him out of defence by stabbing him with a concealed pair of scissors. Jess pleads to him to release the other Rudy's that he's absorbed so that they don't die with him. He agrees, but only if she kisses him. She complies and he dies in her hands, having made her promise to become more open.

Jess starts to take an interest in Alex, an attractive barman, but is estranged of his unwillingness to flirt with girls despite his good looks. Just as Alex's starts to open up, Finn tries to convince Jess Alex is gay by showing her footage he took of Alex giving money to a man in a car park, believing he's paying the man for sex. Despite denouncing Finn's claims, Jess becomes suspicious due to Alex's cooking skills and picture of him with another man. When she asks him about this, Alex claims it's only responsible to believe's his gay if he has sex with other men. The two then started officially dating.

Jess accompanies Rudy and Finn at Richard Saunders' party, bringing Alex along which causes tension between him and Finn who has a crush on Jess. Due to Craig's power, the number of the gang's sexual partners is revealed. Jess is openly bothered that Alex has a total of 48 sexual partners despite his inability to have sex with Jess. Alone, Jess is subdued by the White Rabbit, conjured by Richard's power, and kidnapped. Rudy, Finn and Alex try to save her but are unsuccessful, only for Abbey to come in and kill the rabbit. After the ordeal, Alex finally reveals the reason for his lack of intimacy, which is his vagina acquired when a transgender male swapped it for his penis, forcing Alex to pay for investigators to find who stole his penis.

Jess nevertheless sticks with Alex. After Rudy catches Jess looking at post-op male genitalia, Jess sarcastically claims to be wanting a penis herself. She then reveals Alex's situation to Rudy when Rudy threatens to tell Alex about her swap. Even though Jess aggressively threatens Rudy not to tell Alex that she told. Jess is enraged when Rudy teases Alex about losing his penis, punching Rudy's bare genitals. Jess becomes worried at the lengths Alex will take to retrieve his penis when she finds the man Alex hired to locate the transman. He has been beaten by Alex who then goes after his thief armed with a gun. Jess goes over to the karaoke bar where Alex goes to confront James, the transman who stole his penis. Jess tries to convince Alex to not shoot James but Alex just points the gun to himself, not wanting to live without a penis, which convinces James to swap back their genitals. Alex and Jess then have sex, which proves to be unsatisfactory to Jess as Alex's looks at himself in the mirror during sex.

Despite the fact Abbey saved her life, Jess is mistrusting of her when she sees her acting too friendly to Alex. Jess then helps Rudy rescue his girlfriend Nadine from a convent of seemingly corrupt nuns, helping the gang locate through the building by using her power to avoid any nuns. Returning to Alex's apartment, Jess catches another woman in Alex's bed and storms out. At the community centre, the day is only worsened for Jess when she discovers that Finn had sex with Abbey. Alex follows and Finn tries to defend Jess. The ensuing violence leads to Nadine activating her power to summon the Four Horsemen of the Apocalypse, who proceed to hunt the gang down. During the brawl, Alex gets stabbed in the lung trying to save Jess before Nadine lets the Horsemen kill her in order to save the others.

The next day, Jess is then informed that Alex is getting a lung transplant and powers can be obtained via organ transplant, in which Alex gained the power of Power Removal.

Jess confronted Alex after he got out of hospital, saying that she was struggling because he cheated on her but he also got stabbed for her, but then sees Emma (Series 5) putting on her clothes inside his apartment, and she assumes that Alex has slept with her. However she had been showing Alex her injuries due to her power of Accident Causation and she wanted Alex to remove this for her. Alex later tries to talk to her at the bar but he is attacked by Finn, who is possessed by the power of Satanic Conversion. Jess finds out about this, but she is almost caught by a converted Abbey and Rudy. Jess heads to Alex for help, and later Rudy Two appears to assist them. Alex gives Jess his gun which he used to threaten James (Series 4) with to get his penis back, and Rudy two gives her holy water and a biblical writing to convert Finn back to normal. She heads to the bar and uses her water and code, but the water is sprite and the gun is unloaded, as Rudy Two had also been converted. Jess is converted and the next day, Finn promises Jess sex, but before they can Alex knocks Finn unconscious and ties Jess up. Alex rapes Finn and successfully activates his power to remove the devil from Finn. Due to breaking into the community centre, Alex is placed on community service. Alex and Jess end their relationship for good, and decide to be friends.

Jess' eyes when she uses X-Ray Vision.
Add a photo to this gallery

To Finn: "Me and you, we're friends. We bonded, like the end of Titanic, remember. "

Retrieved from "https://e4-misfits.fandom.com/wiki/Jess?oldid=31001"
Community content is available under CC-BY-SA unless otherwise noted.