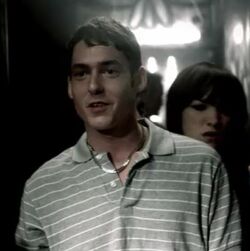 Lee was Kelly's fiancé. They were together for sometime until Kelly punched Lee in the face after hearing his less-than-romantic thoughts. He announced that their relationship was over and fled from the apartment.

Retrieved from "https://e4-misfits.fandom.com/wiki/Lee?oldid=17618"
Community content is available under CC-BY-SA unless otherwise noted.