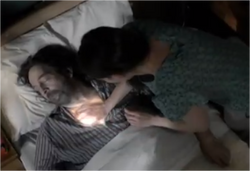 Life Preservation is the power to prevent a seriously ill or injured person from dying.

The power is activated when a person makes skin contact with somone who is near death which causes said person to become surrounded by a white glow. It also appears to be physically draining on the user as Grace nearly collapsed after using it.

Unlike Healing, this power does not get rid of the illness; it merely prolongs the individual's life. Finn's father claimed he was in agony due to being kept alive by the power and his cancer was only getting worse because of this.

Healing; the ability to heal any injuries or sicknesses.

Retrieved from "https://e4-misfits.fandom.com/wiki/Life_Preservation?oldid=27629"
Community content is available under CC-BY-SA unless otherwise noted.