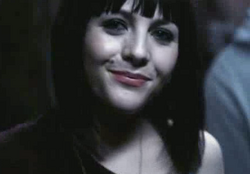 Lily was a bartender who had the power to generate ice when she came in contact with water or moisture on account of her 'frigid' nature with intimacy.

When Nathan witnessed her power in action while she was at work (she froze a stream of water on the counter of the bar after coldly rebuffing his flirting, which travelled to, and shattered, some nearby pints of beer), he told her about his own power, subsequently defending her from her boss.

In return, Lily gave him her number, subsequently meeting the group at a club along with Nathan's brother Jamie. Unfortunately, the pills Jamie gave the group caused the powers to start working in reverse, resulting in Lily generating fire rather than ice. This eventually caused her to unintentionally burn herself and Jamie to death while she had sex with him, and the car they were in exploded. Her spirit appeared to Nathan when he was reconciling with his father, accompanying Jamie as the two went on to whatever awaited them.

In an alternative timeline where the Nazis won WWII, Lily appeared among a line-up of people suspected to have powers in the Nazi-controlled Community Centre of a Parallel Timeline. After the aforementioned Nazis discovered her power, it was taken from her by Seth (who was under Nazi orders at the time), and later given to Captain Smith. She was later seen alone, scared and in all senses powerless in the cells.

Retrieved from "https://e4-misfits.fandom.com/wiki/Lily?oldid=22417"
Community content is available under CC-BY-SA unless otherwise noted.