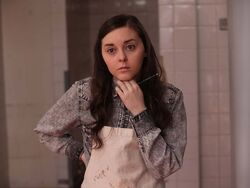 Lucy was a former friend of Simon's, whom he met during his treatment in a psychiatric unit after his attempted arson. She has the power to shape-shift into other individuals. This is not an easy transformation. It causes herself great pain. Her eyes begin to turn black and the lights flicker.

Lucy's clothes, body, and voice also change through shapeshifting, however, she does not gain any abilities of the person she is imitating. Lucy's obsession with Simon causes conflict when he rejects her for his new friends. "They've turned you against me." She eventually comes to realize that he is a different person to the Simon she met in the psychiatric unit and lets him go.

Lucy particularly hates being called mental or being ignored.

When she was shape shifting into different people in the gang, they could distinguish between her and the others because she did not recognize their powers and looked surprised. But when Curtis walks in where the others were, and she was disguised as Kelly she said that Curtis was Lucy because she "could hear what she [was] thinking". This shows Lucy knew about Kelly's power, she found out about Kelly's power when she was in the form of Nathan and heard Kelly say she read Simon's mind and that Alisha gave him oral.

Lucy showing off in Alisha's body.

- Lucy disguised as Alisha
Add a photo to this gallery

Retrieved from "https://e4-misfits.fandom.com/wiki/Lucy?oldid=31375"
Community content is available under CC-BY-SA unless otherwise noted.