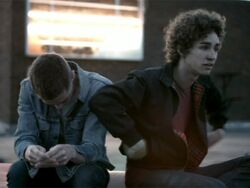 Mediumship is the ability to see the ghosts of dead people.

In the second episode of series 2, Nathan discovers he has the ability to see the dead. He discovers this when he discovers that he has been talking to the ghost of his brother.

In 02x04 he can see Ollie after he's killed. At first Nathan thinks Ollie is alright, but after Curtis tells Nathan he can't see him, Nathan figures out it's his ghost. Also, in 02x06 Kelly's ghost tells him she's been murdered.

It seems this power may have been only activated after he died the first time, as many people did die before but he never saw their ghosts. However, after he died the first time and came back to life it meant he could see other spirits who are dead as he had technically died himself. It is also possible that Nathan still has this power, and it is the result of anyone who comes back to life with immortality.

Retrieved from "https://e4-misfits.fandom.com/wiki/Mediumship?oldid=31151"
Community content is available under CC-BY-SA unless otherwise noted.