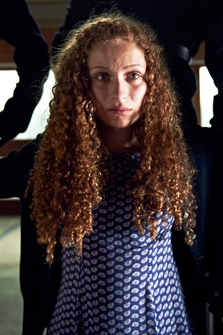 Nadine is a mysterious character Rudy meets at a wake.  While searching for the perfect woman to be his 100th sexual partner, he strikes up a conversation with Nadine, and finds himself interested in her on a far more meaningful level than his previous 'conquests'.

Their conversation is cut short when Nadine notices it's nearing midnight and quickly leaves the party.

The next day she arrives at the Community Centre looking for Rudy; the two chat before she once again runs off, this time dropping her handbag.

Rudy, Abby and Finn follow her to some bushes, where she emerges wearing a nun's habit, revealing herself to be a nun living in a convent.

Her love for Rudy leads her to fleeing the convent, much to the horror of her fellow nuns. While spending some time with Rudy, she is kidnapped and brought back to the convent, held under lock and key.

Using their powers, Finn, Jess along with Rudy and Abby manage to break Nadine out, and she enjoys a brief fling with Rudy.  Later on she witnesses Alex punching Finn, evidence of Abby having premarital sex and the others using foul language; this activity causes Nadine's power to activate, summoning the Four Horsemen of the Apocalypse.

During the attack, Jess suggests they kill Nadine to end her power, though ultimately the gang choose to risk their lives to protect her. This show of selflessness leads Nadine to willingly offer herself up to the Horsemen, one of whom stabs her, fatally wounding her. The horsemen vanish following her death.

Sometime later, Rudy and Finn bury Nadine by a river, with her grave marked by a cross of bound branches.