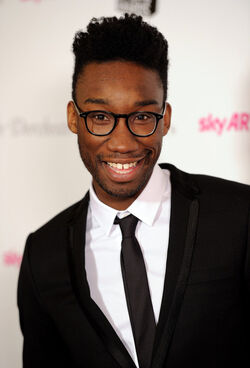 Stewart-Jarrett made his professional stage debut playing a number of roles in 'Brixton Stories' at the Lyric, Hammersmith and has also appeared on stage in 'The History Boys' at the National Theatre and, in 2012, in the revival of 'Pitchfork Disney'. In 2009, Jarrett joined the cast of Misfits as Curtis Donovan. In 2012 he was the last remaining original Misfits cast member on the show, until he was written out during the fourth series. Jarrett also starred in the 2013 conspiracy thriller Utopia as Ian.

Retrieved from "https://e4-misfits.fandom.com/wiki/Nathan_Stewart-Jarrett?oldid=27533"
Community content is available under CC-BY-SA unless otherwise noted.