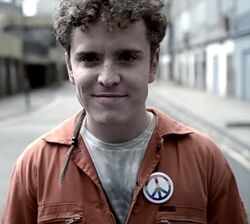 Ollie Banley becomes involved in the community payback scheme after vandalising a coal-fired power station over carbon emissions. He openly questions The Misfits Gang about their powers, and in doing so reveals that he too has a power; he can teleport. However, the rest of the group are unimpressed by his demonstration of this, as he only manages it through great effort and only gets a few feet behind them, though he claims to be capable of teleporting greater distances.

When he teleported he also left behind one of his flip-flops, suggesting some lack of skill. Later, when the group are out picking up litter, a deranged man named Tim, who believes he is in a violent video game, shoots and kills Ollie after he attempts to reason with him.

Nathan sees Ollie's ghost, and they each insult each other. Ollie's heart is donated to Nikki, the girl whom Curtis met in his flash-forward, and the owner of the flat the Misfits broke into. Due to the transplant, Nikki inherits Ollie's power of. Shortly after Nikki recovers from her surgery she starts to teleport for the first time and ends up landing onto Ollie's dead body.

Retrieved from "https://e4-misfits.fandom.com/wiki/Ollie?oldid=28023"
Community content is available under CC-BY-SA unless otherwise noted.