Misfits Wiki
Register
Don't have an account?
Sign In
in: Rudy Wade, Series 4 Enemies, Sentient products of the Storm,
and 5 more

Rudy 3 (Psycho Rudy) is a third, sociopathic and unhinged doppelgänger of Rudy who appears in the third episode of Series 4. Unlike the other Rudys, he is capable of controlling and suppressing the other two when they are joined.

Prior to the start of the episode, Rudy and Rudy Two were able to send him to jail for assault after he attacked a man. When conjoined with Rudy, he is able to take full control; suppressing the other two in true Jekyll and Hyde manner.

At the start of the episode, he is released from jail after serving his sentence and tracks down his doubles. 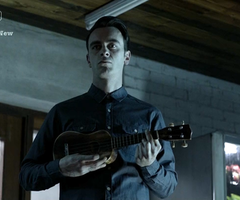 He manages to confront Rudy alone and jumps into him after cornering him in the community centre. While searching for Rudy Two, he begins fixating on Jess, who notices his bizarre behaviour but does not catch on something is wrong. Jess is left rattled when he mentions they are much alike as he can tell someone hurt her.

After absorbing Rudy Two he manages to get Jess alone in the office after locking Greg up and has a conversation with her. After admitting he isn't the Rudy they know he gets her to reveal she was used by her former boyfriend and then attempted suicide; an admission that upsets him from past experiences.

When Jess sees him beat up the DJ in the hall she tries to flee, only for him to catch her and the two share a tense "dance" where he reveals he wants to kill her and proceeds to start strangling her.

Jess, however, stabs him in the abdomen with a concealed pair of scissors. As he slowly dies, she pleads with him to let Rudy and Rudy Two go, which he does after he gets her to kiss him and promise to start letting people into her life again. Rudy later buries him in an unknown location.

Psycho Rudy was violent and had a barely controllable temper that terrified Rudy and Rudy Two. He openly admitted enjoying violence and possessed a twisted version of Rudy's humor and Rudy Two's honesty. He made jokes about killing Finn's step mum and disturbed Finn and Jess when he pointed out their flaws.

He had a disturbed fixation on Jess and was able to tell she had been hurt in the past. When he confronted her and she revealed she had a past experience that was similar to Rudy's experience with Alisha he is visibly shaken. He also reveals he hates the other Rudys for betraying him since they were supposed to be the closest people to him. Also he appeared somewhat jealous of the fact Rudy and Rudy Two were getting on better in his absence; mocking Rudy Two's concern for Rudy and his belief they were friends.

Despite this he was willing to let them go as he lay dying after Jess stabbed him and told her not to make the same mistake he did by not getting close to people.