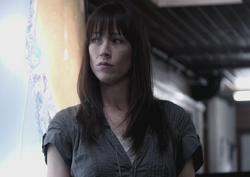 Some time before working at the community centre as the probation worker, Sally and her then-boyfriend Tony went out together for an evening. However, upon their return, they discover that Tony's car had been stolen from the parking lot. Sally, presumably aware of his anger management issues, tries to calm Tony down, only to learn that he had planned to propose to her that night. Shocked and flattered, Sally accepts despite the engagement ring being stolen.

Sally appears at the end of the first episode of the series, the day after Tony and Gary are killed. She resumes his role as the gang's probation officer, arranging and overlooking their activities. On her first official meeting with the gang, she questions them over Tony's abrupt disappearance, only to be met with Nathan's sarcastic comments. Her first assigned task for the group is to volunteer at an event for the elderly. The next known task is to help Ben sort through donated clothing that will later be sent to Africa. During her time, she contacts a detective regarding Tony's whereabouts, expressing to him her suspisions about the group. Days later, Sally learns that Tony's credit card has been used to purchase plane tickets out of the country. Unable to accept that Tony has left her and has fled the country, Sally takes matters into her own hands, including rummaging through the gang's lockers and leaving threatening messages. She contacts Simon over a social networking website, under the alias shygirl18, and begins bonding with him, slowly extracting pieces of information from him over time. In one of their conversations, Simon tells her that he has feelings for someone, to which she encourages him to chase after her. The next day, Simon asks Sally out for a drink, to which she initially turns down due to her job, but eventually agrees. By the end of the night, Sally and Simon end up kissing before Sally leaves; she is unaware that Simon, now invisible, had followed her into her home and filmed her.

Days later, after everyone else has left, Sally coaxes Simon to stay behind and implies that they may end up having sex. As a diversion, Sally asks Simon to get wine from the community centre kitchen, allowing her to rummage through his bag and find his phone. She watches the video where Nathan reveals that they killed Tony, prompting her to hide in the toilets. Simon soon finds her when Sally accidentally lets slip that she is shygirl18. In a bid to flee and report her findings to the police, Sally smashes Simon's head against a mirror but finds that all the exits are locked. Using his power to full advantage, Simon prevents Sally from leaving and the two eventually fight over Simon's phone. However, in doing so, Sally is thrown against a door, fatally hitting her head on a protruding handle; she dies as Simon watches remorsefully at her side.

Following her death, Sally's body is placed in a freezer in an unused storage cupboard within the community centre, where Simon visits it often. Her body is shown briefly in the last episode of the first series when Simon is hiding from the Virtue group. She is later replaced by Shaun.

Her body appears again in the first episode of Series 2; knowing that she will soon be discovered, Simon attempts to move the body from the building, hiding her beneath a pile of blankets in a wheelbarrow. Unfortunately, Simon is caught by the rest of the gang and Nathan (who is actually Lucy in his form) uncovers the body in front of them. The group decides to dispose of the body and, later that night, take a boat into the middle of the river. Attaching a heavy weight to the body, they drop her into the river.

Sally's spirit returned when Jonas, a fraud medium with the power to allow spirits to manifest, performed a live seance at the community centre and brought Sally back for Simon. Sally was sure that she must get revenge at Simon in order to move on and seduced him at his flat. She filmed the two of them kissing and sent it to Alisha. After Alisha broke up with Simon, Sally tried to kill her and throw her off the community centre's roof in order to complete her revenge, but she stopped after she saw Tony for the first time since his death and realised that she hasn't come back for revenge. The two of them finally reunited with a kiss and moved on together.

In a short-lived alternative timeline, Sally discovered Tony's body in her car, after the gang used it to move Tony. She smelled something strange whilst driving, so she pulled over and opened the boot of her car, only to finally find out that her fiancé was dead and tied up in the car. However, Curtis turned back time and warned the gang that this was going to happen, so Nathan threw a brick over Sally's car and distracted her by doing so.

Retrieved from "https://e4-misfits.fandom.com/wiki/Sally?oldid=30881"
Community content is available under CC-BY-SA unless otherwise noted.