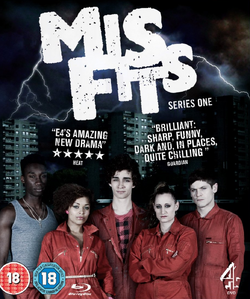 Unlike their more conventional counterparts, they don't swap their mobile phones and ankle tags for capes and tights. Instead, they discover just how tough life can be when you're all that stands between good and evil.

Retrieved from "https://e4-misfits.fandom.com/wiki/Series_1?oldid=27249"
Community content is available under CC-BY-SA unless otherwise noted.