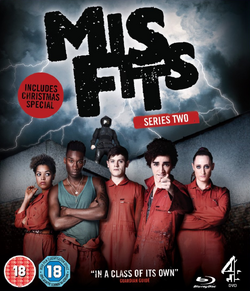 Channel 4's head of drama Camilla Campbell confirmed, after the last episode of Series 1 was shown on 17 December 2009, that a second series has been commissioned for 2010. The events of Series 2 commence immediately after the end of Series 1.

It was also confirmed that filming took place in May 2010 by the cast themselves on Friday Night with Jonathan Ross.

A freak storm left our posse of social outcasts with super powers; Curtis can turn back time, Kelly can read minds, Simon can turn invisible and Alisha can send people into a sexual frenzy with just one touch. Then there's their two dead probation workers (one is buried under the local environmental monitoring station; the other stored in a freezer in the community centre). And finally, unbeknownst to the others, Nathan is trapped six feet under in a coffin, immortal and very much alive.

But it's not just the ASBO Five who were affected by the storm. With the super-charged local townsfolk going the way of Gotham City, this series sees our gang faced with a whole new world of weird and wild characters. And who is the masked, hooded stranger who seems to be watching their every move?

"What was the best idea that never made it on screen?"

"There was one Misfits script which I wrote that was set in an alternative reality where [the cast] were all the opposites of their characters: Simon was a real ladies' man and Nathan had taken his place as a real geek. It didn't work because people tune in to see recognizable characters and I think they know who they want to see. So we ditched it."

Retrieved from "https://e4-misfits.fandom.com/wiki/Series_2?oldid=26476"
Community content is available under CC-BY-SA unless otherwise noted.