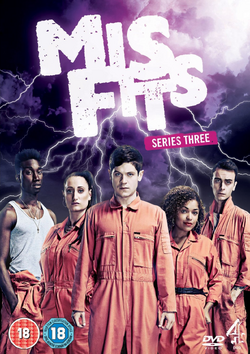 Series 3 of Misfits originally aired on E4 from 30 October - 18 December 2011. It was released on DVD and Blu-ray on 26 December 2011, including all eight episodes and the two online mini-episodes, Vegas Baby! and Erazer.

Resident delinquents - Simon, Kelly, Alisha and Curtis - are joined on community service by new kid on the block Rudy. Rudy gets a rude awakening on his first few days as he learns that with the keys to the infamous locker room comes a great deal of running and screaming and, in some instances, killing.

The gang are back with all-new superpowers. So how did the trade-off with Seth, the superpower dealer, go down? Do any of them have a superpower that's even halfway useful?

With Seth still trading powers, Simon in training to become Superhoodie and zombie-cheerleaders on the loose, things haven't got any quieter for our gang...

Retrieved from "https://e4-misfits.fandom.com/wiki/Series_3?oldid=26479"
Community content is available under CC-BY-SA unless otherwise noted.