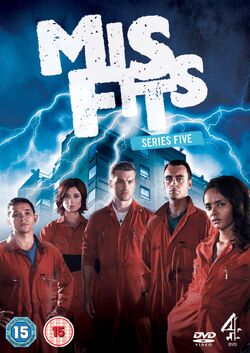 Series 5 of Misfits began airing on the 23rd October, 2013. It is the show's final series and consists of eight 45 minute-long episodes. The series finale aired on the 11th December, 2013.

The show was rumoured to have been renewed for a fifth series on the 14th December, 2012, through Bleeding Cool news; this was later confirmed by E4's announcer after the airing of Episode 8 (Series 4) on the 16th December.

It's been a year since the infamous storm and our favourite ASBO superheroes have to up their game to tackle some real-life, super-powered vigilantes.

Handsome barman Alex discovers that he has acquired a strange new power that he decides to try out... but things don't go exactly to plan and Alex soon finds himself joining the gang in orange. Rudy is shocked to discover he has feelings for Jess, and his downbeat alter-ego joins a mysterious new support group, a safe haven for people struggling with their superpowers. And it's here that we see a very different future facing the team - one which could change things forever.

Retrieved from "https://e4-misfits.fandom.com/wiki/Series_5?oldid=28288"
Community content is available under CC-BY-SA unless otherwise noted.