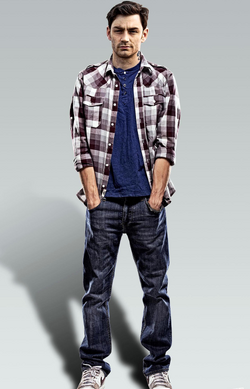 "If you ever find yourself in Uganda, come and say hello."
— Seth's last words on the show, spoken to Jess.

Seth was a well known successful drug dealer on the Wertham estate. Stemming from this and his desire to be the ultimate dealer, Seth's dream came true when he became caught up in The Storm, granting him the power of taking other abilities and being able to place them in others.

Seth was a man with a cold personality at first during his first encounter with The Misfits Gang during the Christmas season, having taken all of their abilities in exchange for money. When the gang returned to buy their powers back he had doubled the price. Later on after having sold all the gangs original abilities, they agreed to buy different powers.

It is later revealed in Series 3 that Seth's miserable personality is the result of the death of girlfriend Shannon who overdosed on drugs bought from him. As the Series progresses Seth undegoes a drastic change in personality as he bonds with the gang assisting them in power related situations aswell as a relationship between him and Kelly blossoms after she rescues him from the Nazis in an alternative timeline and he saves her from Jen's body swap. Despite his intial doubts about Shannon, Seth and Kelly officially became a couple.

This relationship is cut short when Seth finds the power he has been looking for, which is that of bringing people back from the dead. He gives it to Curtis, taking his Gender Swap power after Curtis accidently impregnates himself. In return, he gets Curtis to bring Shannon back to life, ending his relationship with Kelly. When it comes to light that the power causes anyone brought back from the dead or bitten by one to become a zombie, Seth once again relys on Curtis, asking him to kill Shannon before assisting the gang deal with a group fo zombie cheerleaders. Seth then solidifys his love of Kelly, killing Shannon when she tries to bite her. Seth then decides to give up power dealing, promising to take Kelly on holiday to Morroco after assisting Simon fufill his destiny as Superhoodie.

During Seth and Kelly's holiday, they ended up travelling to Uganda. When a young child stood on a landmine. Kelly intervened using her power to defuse it. Kelly then decided to emigrate there to continue defusing landmines to help the locals. Seth returned to the UK for a short while however. While at the community centre with Curtis and Rudy they are all infected by Michael's power of violent obession and in turn become obsessed with the money in his briefcase, turnng them against each other. Seth begins to brutally torture him and then engages in a fight for the case on the roof against Curtis and Rudy as well as newcomers Jess and Finn. Michael dies soon after and the gang are freed from his power.

Later on the next week Seth collects Kelly's things from her locker. The next day while having one final drink with Curtis and Rudy, Jess finally persuades him to come out of retirement one last time to take Sadie's power which she is using to manipulate Finn. Seth tells Jess that if she evers finds herself in Uganda to come and say hello before leaving to catch his flight, leaving Wertham for good to be with Kelly.

Not much is known about Seth's life. He is a former drug dealer, and his girlfriend, Shannon, died of a drug overdose, on drugs which she got off Seth. He felt guilty for her death and wasn't ready to move on. After being affected by the Storm, he possesses the ability to remove powers from others, store them in his body and then transfer them to another person. This power stemmed from his desire to be the "Ultimate dealer." Seth abandoned his drug dealing business and started using his power as a business, purchasing powers off people who don't want them, then selling them to willing buyers. To give or take powers, Seth has to make bodily contact with his subject.

His first client was future Simon during the Virtue takeover, who bought the power of Immunity. He was confused as to how Simon knew about him, and the Immunity power, as he had just taken it from its previous owner.

Alisha first visits Seth to have him remove her power for free, having seen his adverts around the estate. Nathan later ends up selling his immortality for £2,000, followed by Kelly, Nikki and Curtis, who sell their powers for £20,000 each. Seth proceeds to sell Nikki and Alisha's powers to a priest named Elliot, having already sold him the ability to walk on water and magnestism, and sells Curtis' power to an old Jewish man named Friedrich who wants to kill Hitler. The Misfits try to buy their powers back, but Seth doubles the price, so they try to steal Elliot's money, accidentally killing him in the process. At the end of the Christmas Special the gang are buying powers from Seth, with Kelly going first, able to buy whatever power they want, though Alisha and perhaps Curtis cannot receive their original powers. It is discovered in series 3 that all the misfits original abilities had been sold as Curtis states that his new ability 'was the only one left'.

Seth's personality dramatically changes from Series 2 to 3. At the beginning of Series 3, Seth is still unable to get over Shannon. He was seen chasing after a particular power that he wants for himself, but was unable to find a person with that power. Kelly, who fancied Seth, followed him to the graveyard and saw Shannon's grave. She asked him about her and told him that she likes him, but he said that he is still getting over Shannon.

After Kelly told him that she's been to an alternate timeline where the Nazis won WWII and that he kissed her there, he realised that its time to get over Shannon and asked Kelly out on a date. His plan went wrong when Jen, a coma victim with the ability to swap bodies, took over Kelly's body. He saved Kelly and helped Jen to get redemption. That day, he and Kelly officially became a couple.

He seemed very happy with Kelly and they became closer and closer, until one day, one of his workers finally found the power Seth has been looking for - a Resurrection power. Seth intended to use it in order to bring Shannon back to life, but he started to have doubts because of his relationship with Kelly. Eventually, he decided to use the power, but he can't use the powers he takes, so he made a deal with Curtis, who didn't want his power anymore - he took Curtis' power away from him, and gave him the resurrection power for free, for him to resurrect Shannon. That night, they drove to the graveyard and resurrected Shannon. Seth took her home and cooked her her favorite meal, Lasagna, but she said she wasn't hungry and went to bed. The next morning, Seth told Kelly that Shannon's alive and broke up with her. He came back home only to find that his pet iguana has gone missing, without knowing that Shannon, who became a zombie as a result of her resurrection, ate it. Kelly found out about the zombie-side effect from Curtis and tried to warn Seth, but he wouldn't listen. After Shannon killed their neighbour, Seth realised that Kelly was right and went to see her at the community centre, where the gang were just fighting an army of zombie cheerleaders. He talked to Kelly and they made up, but Shannon came along and shouted at Kelly for stealing Seth away from her. Seth and Kelly told Shannon that they're in love, but she wouldn't listen. She tried to kill Seth, but he killed her before she could. After these events, Kelly expected that Seth will quit dealing, but that wasn't the case. She demanded that he will do so, but he said that without this business they won't have any money and she wouldn't stay with him. Kelly was very offended by that comment and stormed out of the room. The next day, Seth took Kelly to his office to show her the he'd sold all of his stuff. He told her that she was right and suggested that they'd go on a holiday to Morocco. Later on that day Seth is called by Kelly to assist Simon in gaining some new powers following Alisha's death. Seth gives Simon the one way time travel power allowing him to go back to help the gang in the past as Superhoodie, as well as £10,000 to buy the immunity power from Seth in the past after he recognised Simon as the man who bought it from him, considering the money as a loan as he was soon to get it back.

During Kelly and Seth's holiday to Africa, Kelly saw a child step on a landmine. She intervened using her power and successfully disarmed the landmine before it detonated. As a result of this, Kelly decided to remain in Africa for the remainder of her community service and help defuse landmines. Seth, however, returned to the UK for a little while. Seth went to the community centre to talk to Curtis and Rudy. While telling them about Kelly, Michael stumbles into the community centre with his briefcase full of money and accidently affects the trio with his power of violent obsession which gives them a lust for the money in the briefcase. While affected by this power, Seth and Rudy team up and lock Curtis in the freezer and Seth begins to torture Michael. Later the next day Jess and Finn showed up for there community service and free Curtis thinking he's being tortured. Under the intention the've come to steal the briefcase Rudy and Seth put them in the freezer, despite Seth's intial doubts that they are actually two innocent young offenders. Rudy attempts to spike Seth, but Seth discreetly pours his drink away and knocks Rudy out with a hole punch. Later Finn and Jess are infected by the power while trapped in the freezer and Finn steals the briefcase after Rudy Two reveals he knows where it is. Seth pursues Finn wielding a hammer. While fighting for the briefcase Micheal takes it and dies after falling from the roof, freeing the gang from his power. Seth then assists the four by helping to bury the body.

Later on the next week, Seth goes to the community centre to get Kelly's things from her locker. Finn asks him to take a power off his Sadie. Seth refuses due to him being retired. Later while having a drink at the pub with Curtis and Rudy, Jess persuades him to take Sadie's power due to her using it on Finn. The two break into the flat where Seth takes the power. Seth then bids farewell to Jess before heading off to the airport so he return to Uganda to be with Kelly, marking his final appearance in the Series as Kelly and Seth never return to the UK. Seth and Kelly would have been later affected by the news of Curtis's death.

With Seth no longer around the estate, people no longer had the chance to remove their powers, meaning those who suffered from unfortunate abilities such as Tim and Mark could not do anything about it. The Power Support Group was put in place as a substitute to help many people cope.

After his Lung Transplant following his stabbing at the hands of the Four Horsemen of the Apocalypse, Alex gained the ability of Power Removal. This allowed people to come to Alex to remove their powers via sexual intercourse, serving as a replacement to Seth.

Retrieved from "https://e4-misfits.fandom.com/wiki/Seth?oldid=31359"
Community content is available under CC-BY-SA unless otherwise noted.