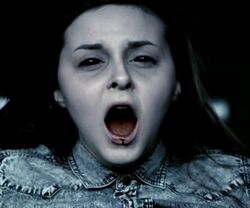 Shapeshifting is the power to alter one's own appearance.

Lucy uses this ability to appear as other people, including Alisha, Nathan, Kelly and Simon. When trying to hide and escape from the Misfits she turns into a mouse. Lucy shows that when she uses her ability, her sclera and pupil go black, the lights distort causing them to flicker on and off and it causes her massive amounts of pain. Lucy's shows that when she shapeshifts, her skin is very malleable.

Lucy stretching her skin very far and abnormally.
Add a photo to this gallery
Retrieved from "https://e4-misfits.fandom.com/wiki/Shapeshifting?oldid=30762"
Community content is available under CC-BY-SA unless otherwise noted.