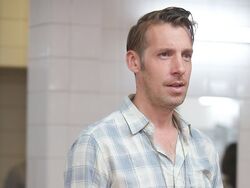 Shaun Merton was the third probation worker to The Misfits Gang and Sally's replacement. He has sarcastic and flippant, with a very relaxed attitude towards the group, and although he seems to understand when they are lying to him, he doesn't let it bother him - very different from Sally's no-nonsense attitude.

Not much is known about Shaun's life. It was suggested by Rudy that he was sexually abused as a child, which is probably true since Shaun reacted very aggressively as Rudy said it. Shaun also implies in Episode 1 (Series 2) that he has a 'sexy' Italian girlfriend, and may participate in recreational drug use.

Shaun introduced himself to the gang as their new probation worker after Sally had gone missing. He was unintentionally killed by them on his first day at work when they assumed that he is the disguised Lucy, a shape-shifting girl, but Curtis was able to undo the event. Also, Pete warned him that there is something wrong with this gang, but Shaun didn't take him seriously.

In the second series' finale he overhears Nathan, Curtis and Simon talking about their superpowers, and sells them out to the media before leaving the country; this timeline is undone when Curtis rewinds time to stop Brian - the first person to go public - from killing the rest of the group, resulting in the Misfits' contact with Shaun simply ending when their community service stops.

He comes back in the third series, still as the probation worker, first seen bossing Rudy, Charlie and Tanya. After getting caught by the cops in a stolen car, the Misfits are sent back to community service, again under Shaun's care (who welcomes them with sarcastic warmth).

When Jen, a coma patient with the power of body swapping, swapped bodies with Kelly, the gang, along with Seth smuggled out Jen's body (which contains Kelly's consciousness) out of the hospital and stored it in the Community Centre. Shaun saw the body and confronted the gang, who had just caught Jen, in Kelly's body. Jen then stabbed Shaun with a screwdriver and escaped. Just before his death, Simon told Shaun about their powers. Shaun laughed in his last few moments, saying: "I can't believe I never picked up on it before..." before finally dying. Later on, Rudy asks Seth if he can borrow his BMW so The Misfits have a way of transporting Shaun to be buried, because "...he's heavier than he looks".

His position was originally to be filled by Laura who was killed by a zombie shortly after entering the Community Centre, who was then replaced by the sadistic and cruel Greg. According to the official Misfits book, after Shaun's death he is suspected to have gone missing due to being involved in a financial scam gone wrong.

"Now, I know this is where I'm supposed to make a big speech about you paying your debt back to society and making a difference, but, seriously, we've all got things we'd rather be doing. Going to see your mates? A little recreational drug use? Making love to your beautiful Italian girlfriend, yeah? I'm talking about me. Now, let's just through with it and get out of here, all right?"
— Shaun's greeting speech to the Misfits gang at his first appearance.

"I know these kids. Lazy idiots, not murderers."
— Shaun dismissing the warnings of a policeman regarding the possible link between the Misfits Gang and the disappearance of the previous two probation workers.

"I can't believe I never picked up on it. Haha. You bunch of dicks. Fucking superheros!"
— Shaun's last words after being stabbed by Jen in Kelly's body.

Retrieved from "https://e4-misfits.fandom.com/wiki/Shaun_Merton?oldid=30882"
Community content is available under CC-BY-SA unless otherwise noted.