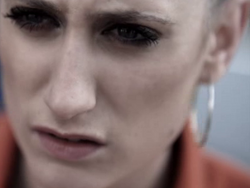 Telepathy is the power to hear other living beings thoughts. Although it may not have been the first power used immediately after the Storm, it was the first power to ever be seen on screen in Misfits.

Kelly first shows to have this power hours after being struck by the storm. This happens when she overhears Alisha criticizing her appearance. Kelly seems to hear thoughts only from people around her (and that she is watching) and mostly when the thoughts are precise and strong enough, as she doesn't hear people thinking all the time. Hearing what others think doesn't make her know everything about these persons: though she heard Bruno's mind many times, she couldn't know he was a gorilla since he didn't think it directly. Kelly cannot "turn off" her power and is thus subject to people's thoughts whether she likes it or not, to her misfortune. Simon suggested using a tinfoil hat to "block" thoughts, but this proved to be unsuccessful.

As Kelly soon discovers, the power is not limited to adult humans; she was also able to overhear the thoughts of animals, including her dog, a gorilla in and a baby. The animals were able to speak coherent English sentences, suggesting that the bearer of the power translates the thoughts into his or her own language.

Kelly sold this power to Seth during Christmas for £20, 000 and subsequently got the power of Technological Aptitude for double the price.

Examples of her power in action include:

Retrieved from "https://e4-misfits.fandom.com/wiki/Telepathy?oldid=31314"
Community content is available under CC-BY-SA unless otherwise noted.