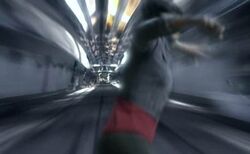 Teleportation is the power to instantly move between two locations. This ability is often activated by the user's will power or by thinking of a place or person.

When Ollie joined the Misfits group in Episode 4 (Series 2), he asks if they posses any unique gifts, he then demonstrates his ability. During the demonstartion he only manages to teleport a few feet as well as leaving a flip-flop behind. However, he states that he has been able to teleport over larger distances. When he dies later on in the episode, his heart is given to Nikki.

Nikki gets the ability due to having Ollie's heart. She shows to be able to teleport at random to the desired location of where a person is. Nikki first shows this when gaining Ollie's heart and wanting to know who the heart belonged to in Episode 4 (Series 2). Nikki teleports ontop of Ollie's dead body, then returns back to the hospital that she is in. Further on, she teleports at random to where Curtis is, finding him hanging along with the rest of the Misfits group in. Nikki then accidentally teleports to the hotel where some of the Misfits have been captured in Episode 6 (Series 2). In Episode 7 (Series 2), Nikki teleports to the other side of the estate when having sex with Curtis, she then decides to sell the ability to Seth.

In Episode 7 (Series 2) Elliot buys this ability from Seth. He first displays the ability when wanting to get away from the Misfits group.

Retrieved from "https://e4-misfits.fandom.com/wiki/Teleportation?oldid=27882"
Community content is available under CC-BY-SA unless otherwise noted.