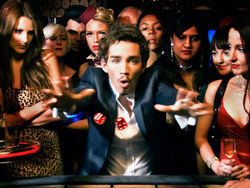 "Vegas Baby!" is an 11-minute-and-a-half-long special episode which was originally intended to bridge the gap between Series 2 and Series 3, showing the original Misfits gang celebrating finishing their community payback by holidaying from Wertham in Las Vegas (and would have showcased the new Powers they had bought from power dealer Seth in the last episode, but this exposition was instead moved to the next episode). Holidaying in Vegas had been talked about in the previous series, and seen in a future photograph with Simon and Alisha in front of the Las Vegas signage.

However, with the decision of actor Robert Sheehan to leave the show, Vegas Baby! became centric to his character of Nathan Young in order to facilitate and explain the departure of the popular character from the show. Vegas Baby! marked the final appearance of Nathan, and also includes the introduction of his replacement in the Misfits Gang, Rudy (Joseph Gilgun)

Released online on 15th September 2011, a month before the first televised airing of Series 3, Vegas Baby! is considered to be 'Episode 0' of Series 3, and is included in the special features of the Series 3 DVD.

Nathan takes Marnie and her baby, Nathan Jr to Las Vegas. He uses his new superpower to scam the casinos, but quickly enough things go wrong. A phone call to the Wertham Community Centre back in the UK is unsuccessful in reaching anybody helpful; although Nathan does briefly speak with the new guy on community service before being dragged into a Las Vegas prison cell.

At the end of the previous series, the Series 2 Xmas Special, the Misfits Gang acquired new powers from the Wertham power dealer Seth. Vegas Baby! reveals that Nathan's newly acquired power is that of Magic. The episode starts off with Nathan (sporting a new goatee and calling himself "The Great Nathano"), his fiance and new mum Marnie and Nathan Jr (albeit not actually his son) in a casino-hotel room in Las Vegas. Nathan displays to Marnie his new magician powers, such as materializing a rose from thin air, and teleporting a $1000 chip up Marnie's vagina. He then announces he will use his power to cheat the casino and get money for the baby and their impending wedding.

Nathan enters the Casino and joins a Craps Table, and by using his new power Nathan makes sure every time he roles the dice it equals seven. Nathan confidentially does this several times winning more and more tokens. Eventually the Casino's Head of Security and Guards start to notice. They go down to investigate and challenge Nathan. If he can get an eleven he will win a major jackpot. Nathan agrees and roles the dice. Nathan won the round but made the mistake of making one of the die seven. When confronted by the casino security Nathan throws his earnings into the air causing a group of players to swarm around the table giving Nathan a chance to escape.

Nathan runs down several hallways but eventually gets stuck in a corner. He is about to be arrested, but manages to pull a rabbit out of his anus. The guards dumbfounded by this stood in shock giving Nathan another chance to escape. This time Nathan makes it to his hotel room, where he says goodbye to Marnie and Nathan Jr. before the guards break the door down and arrest Nathan for attempting to defraud the casino.

At dawn, Nathan is given one phone call from the Las Vegas prison. He rings Simon's phone. However Simon's phone is left in the changing rooms of the Wertham Community Centre, and Simon isn't around. Rudy walks in, wearing the orange jumpsuit of community service, but alone, and picks the phone up and answers. Nathan asks for Barry (Nathan's long-standing, mocking nickname for Simon) but Rudy not being able to recognize Simon as Barry, tells him that there is nobody there called Barry. Nathan asks who he is, to which Rudy replies, "I'm the new guy"; Rudy then shrugs it off and hangs up. His one phone call used, Nathan is dragged into his cell so roughly he loses a shoe, and shouting "Save me Barry!", the same thing Nathan used to shout when he wanted Simon to get him out of trouble. The episode ends with Nathan loudly protesting that he is "too pretty for jail" as he disappears out of sight for the last time.

Retrieved from "https://e4-misfits.fandom.com/wiki/Vegas_Baby!?oldid=30986"
Community content is available under CC-BY-SA unless otherwise noted.