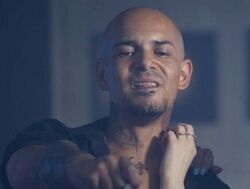 Vince is a tattoo artist who owns "Vince's Tattoos" and has the ability to tattoo people. These tattoos affect how they think and feel. He first appears in Series 2, Episode 3, when Kelly, Nathan and Simon visit the shop for Kelly to have an old tattoo re-inked. He explains to Nathan that each tattoo he has reflects a time in his life and makes him feel pain. After being antagonised by Nathan about several of his tattoos, Vince tattoos Nathan using his ability, making him fall in love with Simon in the form of a heart tattoo with Simon's name.

Some time later, Kelly returns to question him and in doing so falls under Vince's power when she gets his name tattooed as well, falling in love with him. When all the Misfits (without Alisha) return to the parlour to have the tattoos removed, he uses his ability once again to "stab" Curtis with a tattoo of a knife piercing his stomach and place barbed wire around Simon's neck. Fortunately, Superhoodie threw a packet of peanuts to the Misfits before they had returned to the parlour. Vince has a nut allergy and Simon cleverly throws some into Vince's mouth. Simon grabs Vince's epinephrine pen and offers a trade to remove the tattoos for his life - he complies and is given his medication. Vince uses his ability by holding a tattoo gun to his subject, but he can reverse the power without the use of the gun.

Retrieved from "https://e4-misfits.fandom.com/wiki/Vince?oldid=26116"
Community content is available under CC-BY-SA unless otherwise noted.