Start a Wiki
The White Rabbit 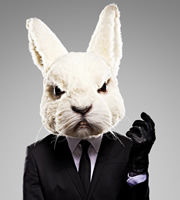 The White Rabbit was physical manifestation of Richard Saunders's drug-fuelled hallucination. Richard watched television as he dropped acid, and the images from golf coverage, a hitman film and a documentary on rabbit vivisection apparently merged in his mind to create the image of a 6-foot tall, suited rabbit, brandishing a golf club.

The rabbit stalked the hallways outside Richard's house party, murdered a girl as she waited for the lift, attacked Rudy, and kidnapped Jess.

Rudy, Finn, Alex and Abby follow the rabbit to the basement, where it attacks the men; just as he is about to kill Alex, Abby stabs him in the back with a screwdriver, killing him.

Retrieved from "https://e4-misfits.fandom.com/wiki/White_Rabbit?oldid=26714"
Community content is available under CC-BY-SA unless otherwise noted.